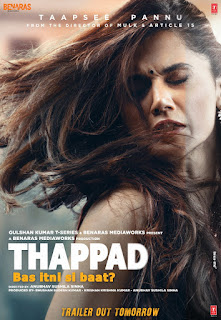 Thappad: Slap on your belief

Thappad is an intense family drama directed by Anubhav Sinha. It's a movie about a perfect family of Amrita (Tapsee Punnu) and Vikram (Pavail Gulati) where Amrita is a modern and ideal housewife who takes care of her house and Vikram is ambitious professionals who want to grow in career.
The movie starts with the usual daily chores life which is quite common in any family and where Vikram is preparing himself to win a promotion to move to London. The movie start with an untoward incidence that happens in a party where Vikram slaps Amrita on rage in front of everyone over a scuffle with his office colleague. That one slap changes Amrita's perspective about her life and unfolds how that slap jolted her but people around her were okay with it. The slap shook her to the core and her ideas about relationship and self-belief and she decided to divorce Vikram for it.

Thappad is not a film about a wife teaching her husband not to take her for granted. It’s about a woman's self-discovery, realizing what is fair, how women are expected to adapt to new normal and accept the casual insensitivity towards them. While watching Thappad you will be quite involved in Amrita’s story and you can so relate with it and feel so uncomfortable about this ugly fact which is shown in the movie. Thappad also busts all our myths that well to do family, or educated / professional class, women who are in power are immune to these issues.

It’s full credit to Anubhav Sinha who perfectly told this story with beautifully crafted characters like Vikram & Amrita Parents, their friends, and siblings, feminist lawyer, housemaid, all perfectly played by the amazing casts. It is a very well written movie and I would say well balanced as it doesn't dramatise the slap or show family drama but focusses on the real issues which we subtly ignore in our society. Thappad has amazing casts and each one does justice to their characters however the great credit goes to Taapsee Pannu who carried the role so beautifully without any flaws.

This one a must-watch for every Indian especially "Men" to have self-realization on how we don't even know how we ignore some minute things in our life around which can create a big impact. The great movies life these usually inspire you, make you think to change the things around, however, this one made me questions my belief system.