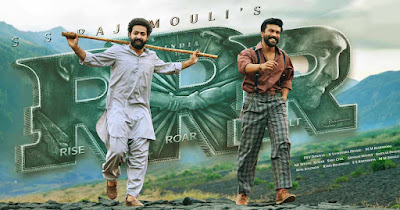 RRR - The Larger Than Life

RRR is a Telugu-language epic period action drama film written and directed by S. S. Rajamouli of Baahubali fame. It is a fictional depiction of the true story of freedom fighters Sitarama Raju and Komaram Bheem played by Ram Charan and N.T. Rama Rao Jr. respectively.

The movie is set in the time of the Pre-Independence British era where a British Governor forcefully takes away a girl from a Gonda tribe for his wife's amusement. Bheem (N.T. Rama Rao Jr.) who is the protector of the tribe goes on a mission to rescue the girl and bring her home. Sitarama Raju (Ram Charan) is a British Police Officer who takes up a mission to capture Bheem to get a promotion. They both met accidentally and become friends and as the story progressed the rescue mission of the girl turned into a freedom fighting movement which was started by Sitarama's father Venkata Rama Raju (Ajay Devgun).

The story may look quite simple the way it was defined however the way it is presented by Rajamouli is simply make you awestruck. If you are impressed with Baahubali and its grandeur, then RRR will make Baahubali look pale. You will enjoy each frame of this movie from beginning to end with an amazing screenplay and superb execution of its storytelling in a grand way. This is world-class movie-making with its perfection which makes impossible action sequences quite believable with grace. Whether it's the cinematography, editing, background score, and acting performances- the movie is perfect in all aspects. It is full masala entertainment with the perfect finesse of movie-making art. RRR keep you engaged from beginning to end and makes you confused about which scene to mark most favorite among many if you have to choose one.

A great performance by Ram Charan and N.T. Rama Rao Jr. and all key characters in the movie, however, this movie simply belong to Rajamouli's vision to portray his stories in larger than life. I was so awestruck that I am running out of adjectives. With movies like Baahubali, Pushpa, and now RRR it is certain that the Telugu film industry is way ahead of Bollywood and its peers and as competitive as any big-budget Hollywood movie.

A must-watch and that too on a big IMAX screen if you really want to enjoy the real essence of it's grandeur. This movie will create a historical landmark in the Indian Film Industry.